May viewing and offer figures 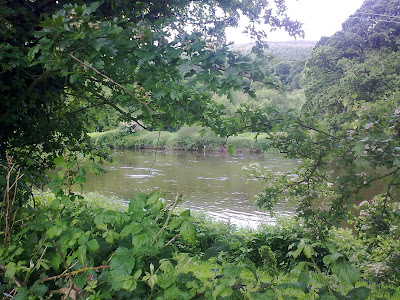 I know it is only the 29th of May as I write, but for the first time in ages, there are no viewings set for Saturday, so I can complete the May figures with some certainty. Whether that is an indication of the market, or just the Bank Holiday weekend, I do not even want to think about. The sun is shining and I have 3 days away from work. Family commitments (ponies) will take up much of the weekend, but that’s good too!

Following the trend from last month’s viewing and offer figures, activity in May 2009 is approximately half that of May 2008.

The number of viewings is down by 50.8% from last year’s figure.
The bright side again this month is that offers, while reduced, are only down by 22.2% from last year.
Lots of people ask me how that is.

My explanation is that last year, people were expecting a large fall in prices, and while viewing plenty of properties, took more of a back seat while waiting to see what happened.
This year, only those very focused on buying a home are viewing.
The lack of finance has also reduced the number of potential homebuyers significantly, with only those in permanent, pensionable employment (is there really such a thing?) qualifying for a mortgage.

Unfortunately, despite the lowest house prices for 5-6 years and the lowest mortgage rates ever, the banks lack of liquidity has forced many would-be-buyers to continue paying up to €10,000 a year in rent, rather than owning their own home.

Hopefully the sun will shine for June-September and the figures will improve. We will see.

Have a great Bank Holiday weekend.

Email ThisBlogThis!Share to TwitterShare to FacebookShare to Pinterest
Labels: May viewing and offer figures, property market

As if things weren’t bad enough for landlords at the moment, with falling rents and falling values, together with it becoming harder to secure tenants, the recent supplementary Budget introduced changes to the Rent Supplement Scheme from 1st June 2009. These changes will have a considerable effect on the lower end of the market from a tenant’s perspective. The main changes are:-
The maximum amount of rent for which a supplement can be paid is being reduced.
The minimum contribution which a person pays towards rent is being increased by €6 to €24 a week.
Rent supplement payments are being further reduced by 8%.
From 1st June 2009 maximum rent limits are being reduced by 6% to 7% on average, ranging up to 10% depending on location and household size.

The revised rent limits will apply to new tenancies from 1st June and to existing rent supplement recipients either moving to new accommodation or seeking a review of entitlement from that date.

The minimum contribution which a person pays towards rent is being
increased by €6 from €18to €24 a week from 1 June 2009 and a further
8% reduction is also being made to all existing rent supplement payments
from the same date.

An advertisement was placed in national newspapers and provincial newspapers to advise landlords of the reductions in rent payments. The Department say that given rental market trends and availability of rental properties, landlords are being asked to respond positively to tenants who present their letter seeking a reduction in rent. 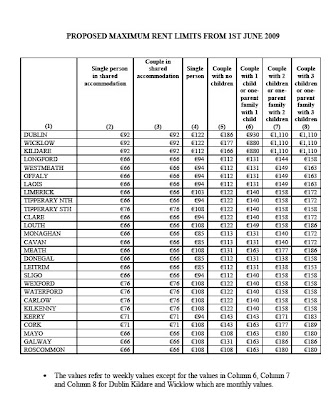 That is easy for the Dept, but is being forced on landlords without discussion.
Any landlords out there adversely affected by this?
www.pfq.ie

Posted by Pat Quirke at 1:15 PM No comments:

Banks not open for business 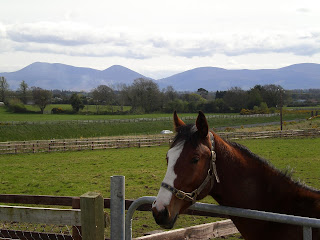 House prices are at their lowest for 5-6 years, while interest rates are lower than seen since the foundation of the State!
Despite innumerable adverts, running almost all day, proclaiming that the “banks are open for business”, it is almost impossible to secure finance on anything.
Since the start of the year, it has not been possible for those wishing to trade-up to get finance.
Now, even first-time buyers cannot get approval.
Banks used to give 3-6 month approval letters to prospective home-buyers.
Where they can now get approval for a much-reduced amount, it runs for only one month.
This is totally impractical.
If you get approval at the start of the month and look at homes in that first week, it would be very unusual for you to reach agreement on the purchase of a property within two weeks.
It will take at least a further two weeks for the solicitors to look at and approve a contract before it will be presented to you for signing.
The month is up before you sign the contract.
You then have to go back to seek approval again.
This can take 2-4 weeks.
If it comes through for you!
In the meantime, the vendor has assumed that you cannot proceed.
Your friends have gone from congratulating you on your intending purchase to planting seeds of doubt in your mind about the house, its location, the price etc.
You end up thinking that this is all way too much hassle and you do not proceed.
Which is what the bank really wants.
While politically, they are supposed to be “open for business” they do not want to do business at all.
Homebuyers get this message.
They are human.
They do not want to suffer rejection.
So they drop out of the buying process.
Just as they are doing now.
Young purchasers are passing up on the chance to buy substantially reduced homes, at substantially reduced interest rates and instead, continue to pay rent to fund a landlords mortgage.
Because the banks are not open for business.

www.pfq.ie
Posted by Pat Quirke at 2:12 PM No comments:

The answer my friend, is blowin’ in the wind.

I have not been a great believer in wind power. It is unreliable, unpredictable and expensive to set up. However, while driving to appointments yesterday evening, I was listening to the radio and heard how wind power may provide a solution to our economic problems, carbon issues, fossil fuel dependency and unemployment.
This breakthrough national project is being launched by the Spirit of Ireland Group.

A bunch of scientists and engineers, working on ideas proposed by Professor Igor Shvets of Trinity College have an idea to make Ireland energy independent in a few short years.

Like all good ideas it’s really simple.
Listening to the radio last night, I imagined a massive complex solution, but it is so easy, I cannot think why it hasn’t been proposed before!
Instead of using wind turbines in scattered parts of the country to generate electricity, wind turbines are used to pump sea water into high elevation gorges formed during the ice age in the West of Ireland.
Already two ideal sites have been identified and more are possible.
These shallow gorges are blocked up with basic rock dams and filled with sea water when it is windy.
A controlled release of this water produces hydro-power, a reliable and sustainable source of energy that doesn’t suffer from the intermittency of wind power.
Thus the greatest problem with wind is solved by huge “natural batteries”.

The basic plan proposes to:
Locate wind farms in suitable areas to harvest energy
Save the resulting energy in Hydro Storage Reservoirs
Natural energy released from Hydro Storage Reservoirs can be controlled and is ideal for both domestic use and export
Secure energy supplies and save up to €30 billion in hard cash over 10 years on fossil fuel imports

The Projected Costs are not huge in the global scale of things.
To save €15 billion in fossil fuel imports over five years, the country will need to build two Hydro Storage Reservoirs at a cost of €800m each. Wind farms will be connected to these reservoirs via a collection network. The cost of adding 1 MW to the network is €1.3m.

Graham O’Donnell, electrical engineer with 20 years International Power Grid experience and spokesperson, with Professor Igor Shvets, for ‘Spirit of Ireland’ is asking people to now consider the role that we can all play in improving the state of our nation, ‘We want to get people talking about this initiative and realising that there is much we can do to determine our future. We must decide, as a nation, if we want to take this route to prosperity. We can be the controllers of our country’s financial and environmental destiny. If people want to “have their say”, we want to hear them and would encourage the public to register their opinion at spiritofireland.org’. Log on to hear more. If this is viable, it is great news for a change. 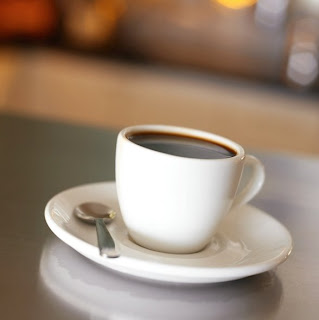 The next Clonmel Coffee meeting will take place tomorrow, Thursday, in Devanes, Irishtown at 2pm. Feel free to drop in for an informal chat... share and learn. All welcome.
Posted by Pat Quirke at 10:55 AM No comments: 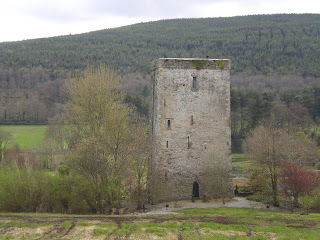 When posting the March figures earlier this month, I said “Viewing levels for the month of April to date are up. It will be interesting to see if this is maintained for the whole month.”
Well, the bad news is, it hasn’t been maintained.

Viewings are down.
The good news is that offers are up.
This is partly explained by the sale of 2 small farms, the first for the year, which generated huge interest. There were many offers for both of them in various formats, prior to their sale.

On the housing front, viewings are down this month, compounding the feeling of gloom in the marketplace following the Budget and the general air of uncertainty concerning jobs and the economy.
Locally, Clonmel is doing relatively well. Our employers in healthcare are robust, their industries seeming less affected than others.

Other industries though are feeling the pressure and this is feeding a reluctance to spend or make any big decisions, such as buying a house.

Retailers in most market segments are under pressure.
Those offering exceptional value for money seem to be surviving well and making sales.

It is the same with housing, pricing is all-important.